It is worth reflecting, especially today, on the problems confronting public sector pension provision. I hope the people striking will have sufficient breadth of mind to consider where the country, which had the best provision for pension funding in western Europe in 1997, including in the public sector, went wrong.

In the beginning we elected New Labour, feeling it was safe to do so under the quasi-Tory Blair and ‘prudent’ Gordon Brown. In Brown’s first budget he set off on the road to where we are today when he tampered with the Advance Corporation Tax regime which had applied for years to pension funds. I have seen figures suggesting that this action has deprived them of funds of in excess of £150 billion since then. Part of the effect of this has been that private sector pension pots have shrunk and final salary schemes, once commonplace, have all but disappeared.

Public sector schemes have not been so badly affected because, effectively, they are supported by everyone else’s taxes. As a councillor from 1998 to 2010 I saw that, in my early years it was occasionally the case that no money came from the General Fund to bolster the pension fund, so well were the fund’s investments performing in relation to the demands upon them. Latterly substantial subventions have been necessary and these have come from Council Tax payers.

Which brings us to the second prong of Labour’s creation of the current crisis. Prudence was abandoned and profligacy was the order of the day. The Guardian on Wednesday bulged for years with adverts for new public sector appointments adding hundreds of thousands to the public payroll and billions to the pension commitments made to each of them. Brown, we know, was creating a ‘client state’ of millions of voters with a vested interest in maintaining and expanding the bloated public sector payroll and the Labour government with it. On top of that we had inflation-busting public sector salary increases whereby  Chief Executives of even small local authorities are being paid more than the Prime Minister – and it doesn’t stop at CEOs, the others are paid pro rata. And it worked for a time – at the expense of borrowing heavily even in the most benign economic circumstances for decades, when a truly prudent policy would have been to repay old debt, rather than taking on new debt all the time. That, and to boost wealth creation and the private investment from which it flows.

And the country fell for it! It suited many of us to believe that Gordon had really abolished the economic cycle and that the cloud-cuckooland we all inhabited would last for ever. Even George and Dave seemed to fall for it, abandoning ‘Thatcherism’ and banging on about ‘sharing the proceeds of growth’, when they really should have known better.

The egg laid by Tony out of Gordon has hatched an enormous chicken which had to come home to roost sometime. Now is the time, but let no-one be in doubt as to the parentage of this particular bird.

The Referendum has produced a clear result against AV. Apart from Camden I can’t find any polling area between The Scillies and Orkney and Shetland that actually voted for it. Unlike the regionalpolls in Scotland and Wales this wasa truly national vote showing a degree of unanimity across the UK that Unionists like me can only find profoundly heartening. Alex Salmond and Ed Miliband should take note.

Many Lib Dems will feel sore. I understand that. But taalk of getting more aggressive within the Coalition – or even leaving it altogether – would be disastrous for them. Some Lib Dems would obviously like to be in permanent opposition and are very uncomfortable being in government. If they walk away now that’s the future for them. But they mustn’t con themselves into believing that they can ever go back to where they were 12 months ago- All things to all men won’t wash any more.

The Conservative party has actually emerged with more seats even than 2007. We also have more Welsh Assembly members but fewer MSPs. The constitutional dog’s breakfast that was Blair’s Devolution wasn’t supposed to produce this sort of  result. That it has is a beautiful illustration of the Law of Unintended Consequences – it’s what comes of fixing what ain’t broke! It is broke now and Cameron will have to take note of that.

Glad to note that David Cameron followed my sartorial advice and wore a morning suit.

My influence is obviously growing!

It was a good day! 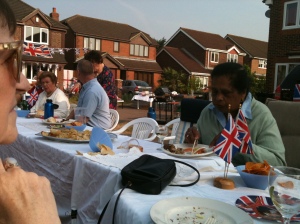 The TV coverage of the event was excellent. The weather was fine and even sunny at times. Our neighbours had a street party immediately after the wedding. Thanks to the unofficial committee that organised it! And all with minimal interference from the Council!!

How sadly typical of the BBC it was, however, to give airtime some some self-important lefty journalist who wanted to carp and criticise. They might say it was in the interest of ‘balance’, yet their idea of ‘balance’ is to give equal airtime to detractors of the country and its institutions(who speak for, perhaps, 10% of the population) to that afforded to upholders thereof. It’s time to take this seriously and demand that the publicly funded broadcaster more accurately represents the vast majority of the citizenry, who do not read The Guardian or sympathise with its views.

While we’re on that subject, I wonder if people realise just how dependent on public money that newspaper has become, having been for years the journal de choix for the advertising of the public sector non-jobs with which New Labour created its vast client state. Time to stop that too!

It seems Chris Huhne is tearing his hair out over the NotoAV leaflet and other activities of the NO campaigners. Some of them have been naughtily going around with placards, curiously like the YES lapel badges, displaying quotes of Lib Dem pronouncements on AV (especially from the DPM!) before they decided it was the best thing since sliced bread.

Being lampooned in this way for inconsistency is something the Lib Dems aren’t used to. According to my good friend Mary Reid (see blog link) there’s no such thing as the Lib Dem party as such. It’s a sort of confederation of autonomous local associations. So you could say that inconsistency is woven into the very fabric of the Lib Dems. In fact I have said so, many times!

Hitherto it has been very useful as the party could be all things to all men and never be called to account for its promises. Now it’s in government things are different. A coalition with Labour would have produced the same result for them. Pity really, because coalitions is what they say they’ve always wanted.

Ah well, Chris, be careful what you wish for in future.

What to wear at weddings…….

Depends on the wedding. But if someone invites you to a formal event you should dress appropriately.